Earlier this year, a local primary school had a hero day to raise money for the flood appeal throughout Queensland. Many students would have dressed up as Batman or Spider-Man. However, for 6-year-old Korbin, his idea of a hero was someone who didn’t wear a cape; Dr Elias Kehdi at Queensland Eye Institute (QEI) who saved his sight.

Strabismus is a condition where the eyes are not properly aligned and cannot look at the same place at the same time. Detected when he was 2 years old, Korbin had a form of strabismus called large angle exotropia meaning his eyes would drift out. Without treatment strabismus can become worse.

It may surprise some to learn that strabismus is the most common eye disorder in children with about three and five per cent of Australians affected by the condition.

The main signs usually are the misalignment of the eyes. The two most common types are convergent (inward turn of the eye) and divergent (outward turn of the eye). Dr Elias Kehdi, Paediatric Ophthalmologist at QEI explains, “There other abnormal eye turns but they are less common. One misconception is that both eyes turn at the same instance but in most situations this does not happen. One of the eyes must be focusing at the visual task at hand and thus pointing straight.”

Dr Kehdi adds, “A fair number of children I see have a divergent squint i.e. exotropia. This is when one or both eyes may turn outward, the more common of the horizontal strabismus conditions. In some cases the family may not notice the child’s turned eye especially if they have some degree of control over the turn. However this may still affect their performance with tasks such as studying.”

Korbin had surgery in May 2021 on both eyes which was essential given the seriousness of his condition.  Korbin’s surgery required operating on the muscles that control the horizontal position of the eyes. This involved weakening and strengthening certain muscles to reposition the eyes.

Korbin’s mother Grace is full of praise, “Dr Elias Kehdi made surgery a breeze for Korbin and eased any worries and concerns we had. Korbin idolises Dr Kehdi and wants to be an eye surgeon for kids when he grows up so he can help other kids just like Dr Kehdi has helped him!”

“Dr Kehdi fixed my eyes and helps heaps of kids, can I be him as a hero?” 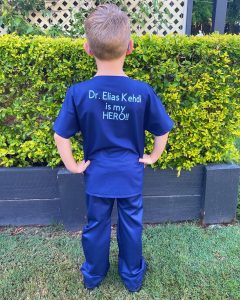 With this type of surgery, the average success rate is around 85%. Dr Kehdi explains, “Although we operate on the normal healthy eye muscles, in most instances the issue lies with the abnormal control of these muscles. Unfortunately, there are no treatments for that thus the root cause is not eliminated. Therefore post-surgery, there will always be a risk the eyes could drift again throughout the patient’s life. However, further surgery can be arranged if required.” 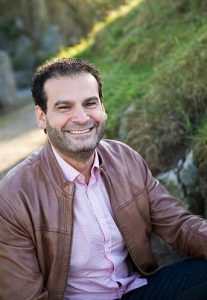 Grace and the family are forever grateful to Dr Kehdi and the team. “Korbin is healthy, intelligent and has a great understanding of how everybody is born differently and that his eyes make him perfect in his own way! He excels in school receiving the Sacred Heart Excellence Award for Mathematics and Physical Education for Grade 1. He also plays rugby league and has the kindest heart, as parents we couldn’t be prouder. “

“Nothing we say or do will ever express our gratitude and appreciation to Dr Elias Kehdi and the team at Queensland Eye Institute!”