Jason has congenital glaucoma. Blind in one eye since birth, he now has just 10% sight left in his other eye. Tragically, he could wake up any day completely blind.

Only 41, Jason is married to Sarah who he met through friends. They have three children; seven year-old Troy, five year-old Bree, Zac aged four and are expecting a new baby next April.

Sadly, glaucoma has also struck other members of their young family. Four-year-old Zac is a carrier with high eye pressures and Troy has vision issues, both of which could lead to blindness. 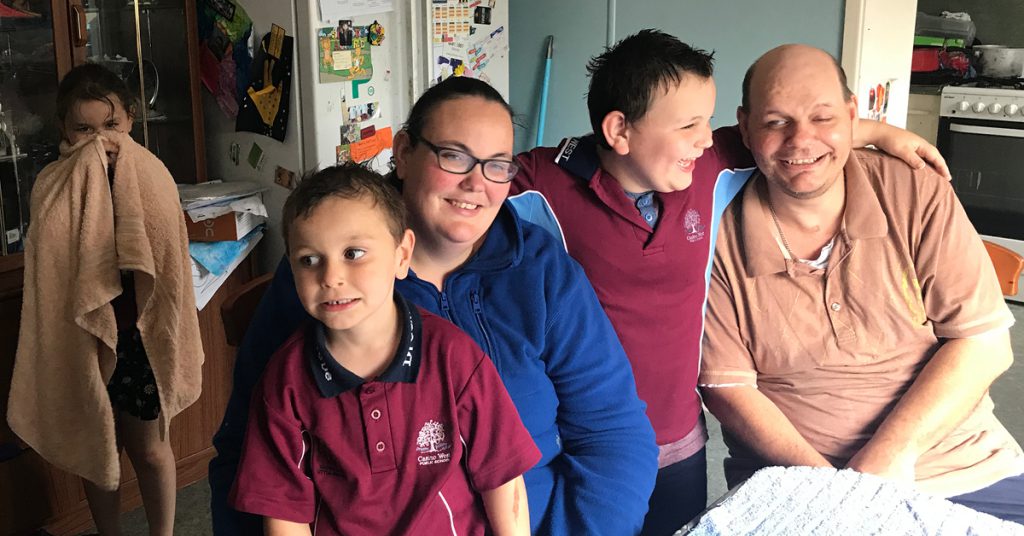 “It’s one thing for me to have glaucoma, but knowing it could cause blindness in our children has not been easy to live with,” says Jason. “Three of our family of five are affected.”

Sarah says Zac was just five weeks old when they were told he was a carrier and could develop blinding glaucoma any day. “Nothing prepares you for the news. We know at some point Zac could go blind but not sure when. Life has to be normal in the meantime.”

Sarah describes how the family go from day to day. “It’s scary with Jason – living with the fear that any day he could wake up completely blind.”

Jason says Sarah helps him a lot. “She’s my rock. It’s not easy with three kids and another on the way, never mind having a husband who’s practically blind.”

Hospital visits are frequent. Between Jason, Zac and Troy most months see a trip to Brisbane from their hometown of Casino, near Lismore in New South Wales. “It’s a long day, and we never know what news we’ll be receiving and how it could change our lives,” says Sarah.

Jason has had so many eye operations he has lost count. He put off his last operation until after his son Troy’s birthday.

“I was dreading the operation. Every operation runs the risk of me going blind and I was determined to see my boy’s special day.”

Jason has good days and bad ones. He loves to help around the house, cooking and cleaning when he can. His very limited sight can be worse some days – completely cloudy and murky.

“Those are the days I get angry, frustrated, anxious and annoyed.” But despite everything, Jason is grateful.

Jason says the research QEI undertakes has a profound impact on his life and the lives of many others each and every day.

“My clinical care and QEI’s scientific research has saved my sight, allowing me to maintain my independence which means so much to me.”

Dr Mark Chiang is both Jason and the boy’s ophthalmologist. Dr Chiang trained at the prestigious Moorfields Eye Hospital in London and specialises in paediatric and adult glaucoma.

Dr Chiang explains that increased pressure, called intraocular pressure, can damage the optic nerve, which transmits images to your brain. If the damage continues, glaucoma can lead to permanent vision loss. Without treatment, glaucoma can cause total permanent blindness.

The most common type of glaucoma, primary open-angle glaucoma and the rarer congenital glaucoma, can both be hereditary. If members of your immediate family have glaucoma, you are at a much higher risk than the rest of the population.

“I would like to thank QEI from the bottom of my heart, I have still got my eyesight.”

But if Jason had a wish this Christmas it would be to have better eyesight in just one eye. “Even with sight in one eye, I would be so happy!”

By giving today, you can help QEI save the sight of young patients like Jason, Troy and Zac and carry out vital research into the causes and treatments for glaucoma.

Your donation will help the Queensland Eye Institute to continue the life-changing work we do.