Patients with low vision due to retinal disease will be one step nearer to a clearer diagnosis with a first for Queensland. QEI Clinic now has the State’s only Maia Microperimetry machine, which analyses retinal function.

The retina is the thin layer of tissue that lines the back of the eye on the inside and is located near the optic nerve. The retina receives light that the lens has focused on, converts the light into neural signals, and sends these signals on to the brain for visual recognition. 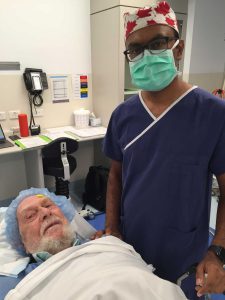 More than 453,000 Australians are living with a visual impairment or blindness with one in two Queenslanders having vision issues.Conditions such as age-related macular degeneration, where the central retina is damaged over time, can prevent the retina from receiving or processing light. This prevents the brain from receiving this information, leading to blindness.

The QEI Clinic’s Dr Abhishek Sharma says, “Basically, the retina obtains a picture from the focused light, and the brain is left to process what the picture is. Due to the retina’s vital role in vision, damage to it can cause permanent blindness.

“This new machine, which has previously only been available in research centres in Melbourne and Sydney, combines retinal imaging, retinal sensitivity mapping and fixation analysis in one examination and is a powerful tool to detect, describe and follow up pathologies affecting the macular area – the most sensitive part of the retina.

“I’m delighted that at QEI I’ll be able to support more patients with low vision due to retinal disease. I came across the machine during my time in Canada and was very impressed with its capabilities. Microperimetry tells us which part of the macular is seeing or not seeing, which part of the macular the patient is using well, and whether we can improve their function. We can look at the world through the patients’ eyes which makes it very valuable.”

The machine’s great advantage is its ability to record and control a patient’s fixation activity while measuring their visual field. This eliminates errors caused by fixation losses.

Microperimetry is a type of visual field test, which uses one of several technologies to create a ‘retinal sensitivity map’ of the quantity of light perceived in a specific part of the retina in people who have lost the ability to fixate on an object or light source. Previously a more generally available test is a 10-2 conventional perimetry test.

Dr Abhishek continues: “Sometimes we don’t get the whole picture. I had one patient who could identify one large letter at a time on an eye chart but had given up trying to read a magazine. The MAIA microperimetry machine can help ophthalmologists such as myself to solve puzzles presented by patients whose visual function is inconsistent with their clarity of vision.”